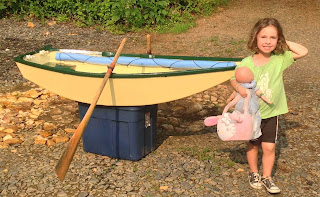 A few years back, I built an ultra scaled-down version of the Auray Punt for the girls. Camila was three and the boat fit her and Lucia perfectly. It made a perfect first experience of dragging a boat around, getting in and out, and figuring out the non-intuitive motion of rowing.

They have both grown, Lucia had her turn at the rowing game, and now they are getting too heavy for the little coracle-like craft. 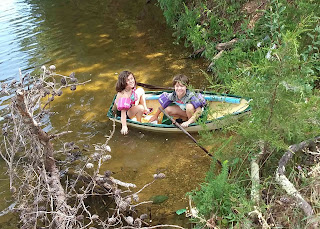 Not to mention, I had inadvertently built it with INTERIOR plywood! That's right folks, Sureply®
is good stuff, but it is not made with exterior glue... oops! 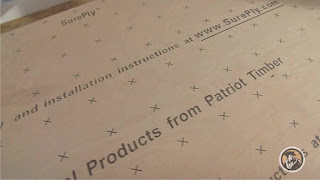 As my soak/boil tests in the past have proven to me, even interior plywood will surprise you in its initial water resistance, and, as it turned out, it was just enough to see us through this stage in their development before it started to come apart. 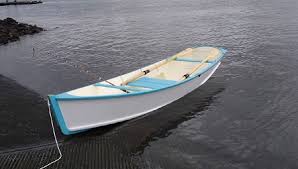 For their next boat, I decided on Michalak's QT rowing skiff. I thought about building it full sized, but I was afraid they wouldn't even be strong enough to pull it a few feet up a bank, so I opted for a ¾ version.

Even this smaller size required a butt join in the 1/4” B/C pine that I used (exterior this time!). 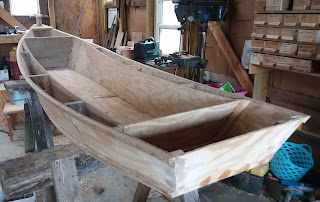 I wanted side air boxes so they can flip it over and actually be able to get back into it in water over their heads. I have a theory that, being parallel, I can run a long cleat along the inside walls of these boxes to support the ends of a movable thwart which will allow the rower to adjust their weight fore and aft.

All those little triangular bulkheads you see are holed out through the center so they communicate with one another as well as being cut short on the bottom, leaving little limber holes.  The theory is that a 7/8" hole in the after part of the deck and one in the forward part will allow enough air flow not to create dead air issues in storage, but they can be corked up for use.  Good idea?? Please  comment.